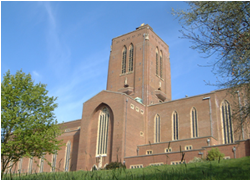 The Founding of the Guild

Proposals to divide the old ecclesiastical Diocese of Winchester had been discussed as early as 1903 but it was not until 1924 that the decision was ratified by the Church Assembly and both Houses of Parliament.

Soon after, suggestions that the bellringers’ Winchester Diocesan Guild be similarly partitioned were discussed at Guild and District meetings, particularly the Guildford and Yorktown Districts. Firm moves towards the formation of the new Diocese of Guildford Guild were finally made with a proposal put before the Guildford District of the Winchester Guild at a meeting on November 12th, 1926.

The area to be included in the new diocese was nominally covered by the Guildford and Yorktown Districts. However, a large number of towers, particularly in the east of the new Diocese, were not affiliated to the Winchester Guild and the two Districts between them only represented 28 of the 57 towers in the new diocesan area, many of the rest having strong ties with the Surrey Association. The Guildford District was the stronger of the two; indeed it was numerically the largest in the whole Winchester Guild so that a concerted action by its members carried considerable weight in Guild affairs.

In December 1926 five members from each District met at Woking, and this was followed by a Special General Meeting of the Yorktown District in January 1927, when it was agreed to support the Guildford District Plan for the new Guild. 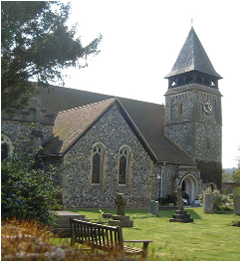 An Organising Committee was then set up, comprising the District representatives together with others invited from towers not affiliated to the Winchester Guild. The Guild Central Committee acknowledged the wishes of the Guildford and Yorktown Districts to form a separate Guild, and at an Annual General Meeting of the Winchester Guild, held in Guildford on July 2nd, 1927, terms for the separation were agreed.

The new Diocese came into being on May 1st, 1927. A preliminary General Meeting of the new Guild was held in Guildford on November 19th, 1927, attended by nearly 200 prospective members from 42 towers in the Diocese. This meeting endorsed the proposal to form the Guild, approved the draft rules prepared by the Organising Committee, selected the Guild’s first general officers and agreed the division of the Guild into four Districts for administrative purposes.

The Inaugural Meeting of the Guild was held in Guildford on December 31st 1927, and here the motion to found the Guild was unanimously accepted. 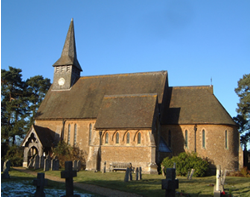 One of the original stated objects of the Guild was”to assist, by instruction, those desirous of acquiring the art of change ringing”. To this end the Districts each set up practice schemes to help the weaker towers. These appear to have been quite successful in the Leatherhead District and moderately so in Guildford, but elsewhere they received little support. It is apparent from the peal records of the early years that the centres of enthusiasm for ringing were Guildford and Leatherhead, with Alf Pulling and Bert Harman being the principal conductors, whilst there was virtually no peal ringing activity in the Chertsey District.

The four Districts of the new Guild were centred on Chertsey, Farnham, Guildford and Leatherhead. The Guildford District was by far the strongest in all respects, being centred on the Cathedral Church with its “crack” band, led by Alf Pulling, and including 22 of the Guild’s towers and an initial membership of 145. Numerically the Farnham District under the Mastership of Richard Hasted was the next biggest, its 11 towers producing 104 members whilst the Chertsey and Leatherhead Districts with 12 towers apiece mustered less than 70 members each.

When the Guild was formed, Alf Pulling was recovering from a serious accident which kept him out of peal ringing for nearly two years, so the field was left wide open for others to score first peals for the Guild. In the event, the local band at Capel forestalled all others by ringing a peal of Oxford TB Minor the day after the Inaugural Meeting. This was followed by the firsts on eight and ten on the next two Saturdays at Ashtead and Leatherhead respectively.

With Alf Pulling out of action, it was over a year before the Guild’s first peal of Stedman was rung, but after his return to fitness, peals of Stedman Triples at Holy Trinity, Guildford, predominated in the Guild’s peal reports. However it must not be supposed that the Trinity band could only ring Stedman, as peals in various Surprise methods including London, Bristol and Double Dublin were also scored. Nevertheless, one may note that of the first 500 peals for the Guild, Alf Pulling conducted 250 and 138 of these were of Stedman (over 100 were rung at Holy Trinity, Guildford alone)!

In the years before the Second World War both the Farnham and Guildford Districts gradually increased their memberships whilst Leatherhead’s numbers kept fairly steady. The Chertsey District struggled to survive; initial enthusiasm for the new Guild waned rapidly and in just two year numbers halved, never rising above 50 until after the war.

The War and its Aftermath

The War was, naturally, a very quiet time for the Guild. Two of the most respected members, Jack Goldsmith and Walter Harrison both died in 1942. A few handbell peals were rung during the period of the ban and monthly silent practices were held at Leatherhead, where the clappers had been removed from the front eight.

At the end of the War things quickly revived, membership increased and peals were more prolific than in earlier years. In 1950 a reorganisation of the Districts took place with a view to equalising the number of towers in each. Three towers were transferred from the Guildford District to each of the other Districts, giving each about 15 towers. This move certainly improved the Leatherhead District’s membership but it was a number of years before it made any difference to Chertsey, whilst the Guildford District in fact suffered for the next decade.

The early 50s saw Alf Pulling’s retirement from the peal ringing scene. This left a gap which nobody has subsequently managed to fill to the same extent. In all but one of the Districts there were frequent changes in officers, a pattern which, with one or two exceptions persists to the present day. At the time, the installation of two new rings of bells, at Stoke-next-Guildford and Stoke d’Abernon, and the rehanging of St Mary’s, Guildford (they had been out of action for half a century) and Capel (they had been unringable since shortly after the first peal for the Guild) brought new life. The Guild started to look a lot younger than it had done in its earlier years.

The Guild’s biggest challenge, the provision of a ring of bells for the new Cathedral, faced the membership from the early ’30s. A Cathedral Bells Fund was set up in 1933, before construction of the new Cathedral had even started. It received little support for many years but a Sacring bell, cast as a memorial to John S Goldsmith, was hung in the incomplete building in 1947 and a further bell, the ninth of the present ring, provided as a memorial to Alfred H Pulling in 1961.

Fund raising started in earnest in 1962 with considerable encouragement from the new Bishop, Dr G Reindorp. Each District attempted to raise enough money for one bell. Another had been promised, and donors were sought for the remaining four. In 1964 following a very generous gift the outstanding amount was found and the ring of 10 was dedicated on May 17th 1965, the fourth anniversary of the consecration of the Cathedral.

In 1969 when the Guild President, the Bishop of Guildford, said he would like to see the ring augmented to 12, the project was restarted. The goal was eventually achieved in 1976, the construction of the additional frame and the hanging of the two new bells being undertaken by Guild members to help defray the cost.

Guild Dinners and The Ringing World

One of the features of Guild life over the years has been the annual dinner event. This was first held in 1931 and proved to be a popular function with after-dinner entertainment provided by the members. The War caused the cessation of the event but it was revived in 1950. In the early post-war years the main entertainment was provided by the Farnham District Glee Club, Messrs E J Bragg, C W Denyer, G S Joyce and W H Viggers. Subsequently there were demonstrations of handbell ringing and dances were organised. In the late 1980s the popularity of the dinner waned to the extent that it was not held again until 2014. Since then four more dinners have been held with an attendance of about 60. In 2003 a very successful lunch was held to mark the Guild’s 75th anniversary.

The Guild has a long association with The Ringing World, which was produced in Guildford until 2002, when it moved to Andover. Not only was the Founder, Proprietor and First Editor of The Ringing World the Guild’s first General Secretary, but except for four years after John Goldsmith’s death in 1942, the editorship was in the hands of Tom White, Charles Denyer and David Thorne, all members of the Guild. For a number of years after the move members of the Guild continue to serve as directors.

Since the mid-1980s the Cathedral has had a strong band capable of ringing a variety of Maximus methods, mainly comprising experienced ringers who have moved into the area from elsewhere. The band has often competed in the National 12-Bell Contest, which it hosted in 1988 and will do so again in 2021. Farnborough and Old Woking have also maintained strong local bands for many years, but many other towers have few experienced ringers and are not always able to ring all their bells each week. Nevertheless, there are no really silent towers, with most having their bells rung regularly for Sunday services, either by their own bands or in conjunction with other towers.

In 1979 the Bell Repair Fund, which up to then had only made small grants to churches in the Diocese, was reconstituted as the Bell Restoration Fund and registered as a Charity. Up to the end of 2016 grants totalling £227,500 had been made from the fund, ranging individually from £35 to Send in 1983 to £25,000 to Farnborough in 2004 towards the stabilisation of the wooden tower and rehanging of the bells. Throughout its life the Fund has been well supported by regular donations from PCCs and tower funds, a proportion of members’ subscriptions, collections at meetings and individual donations. As a result, it has been possible to make a number of substantial grants from the Fund towards new or replacement rings (e.g. Dorking, Epsom, Christ Church, and Hawley), augmentations (e.g. Farnham, Crondall, Alfold and Compton) and major rehangs (e.g. Ranmore, Weybridge, Witley, Puttenham and Walton-on-Thames), as well as many smaller projects.

In 2015 a legacy amounting to £185,000 was received from the estate of Miss Bridget Gordon, a former ringer at Send. A competition was held, open to all towers within the Diocese, with the objective of making substantial grants towards the cost of major projects which might not otherwise proceed. Six towers were selected, including the replacement of the old rings of eight at Godalming and Yorktown with new rings, a ringing gallery for Chertsey and the tuning and rehanging of Bramley bells.

It is perhaps a matter of some pride that the Guild has no unringable towers with five or more bells or bells that are difficult to ring, that most towers are well maintained and that well over half the rings have been restored in one way or another over the last 30 years.